I finally grew tired of the crappy Intel GMA500 "Poulsbo" graphics chip in my Acer Aspire One 751H (read all about it), and went ahead and bought a Lenovo ThinkPad X100e.

It is available in, yes, red.

The first thing I did was to photograph the EULAs that were presented when turning the Lenovo ThinkPad X100e on. I could not accept the Windows 7 EULA, so I did not check the box, and the "Next" button kept being unclickable.

Then I replaced the 160GB harddisk with an SSD and installed Debian unstable on it.

The install went smoothly and there were absolutely no problems with the graphics card. Hear that Intel? ABSOLUTELY NO PROBLEMS.

It is nice that the X100e has a processor that is 64 bit. (Funnily it seems that the operating system the machine comes with is "Genuine Windows 7 Home Premium 32" - uhm, 32?!)

I was recommended to get the two-core version, but I didn't bother - the single core, and slower, Intel Atom processor in the Acer was plenty fast for me.

The X100e has two slots for RAM, so I put in the 2GB from the Acer and now have 4GB in my netbook. Overkill, but why not.

The keyboard on the ThinkPad is a lot better than the one on the Acer, which in comparison seems quite flimsy. The three buttons for the TrackPoint is really nice as clicking right and left button simultaneously on the Acer can sometimes be a little finicky.

The screen is glossy on the Acer and not on the Lenovo. I wasn't bothered much by the glossiness, but non-glossy is slightly nicer, I think.

While the Acer is totally quiet, unfortunately the Lenovo isn't. Apparantly the CPU produces quite a bit more heat, making the fan-noise noticable when in quiet surroundings. Playing a video at normal volume drowns it out, though. So it is disappointing, but not a showstopper for me.

Also the Lenovo gets quite hot, so sitting with it in your lap for a long time isn't that comfortable. You need something under it, like a book.

I wasn't so worried about the wifi because the Atheros based card in the Acer worked great out of the box on Debian unstable - I literally didn't have to do anything to get it working. So I thought that if the wifi in the Lenovo didn't work out of the box, I would just put in the card from the Acer, problem solved.

The Realtek card needs drivers from the vendor (never a good sign) and they didn't immediately work for me, so I swicthed the cards.

Then the Lenovo would not boot. It plain refused to, beeping and displaying an error message: "1802: Unauthorized network card is plugged in - Power off and remove the miniPCI network card."

Now, after I bought the Acer I blamed myself for not researching it enough to realize it had the driver-impaired Poulsbo chipset, but I had never heard that Lenovo LOCKS WHAT WIFI CARDS YOU CAN USE. That is mindboggling stupid, because that means that they are annoying the hell out of their customers.

I tried taping over pin 20 as described on ThinkWiki, but it didn't help, and I didn't feel like trying to patch the BIOS, or the card, so finally I broke down and searched for more information on how to get the Realtek vendor-drivers installed properly. 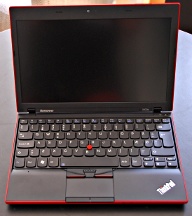 (I spent quite a while looking for another wifi-card to buy, but I couldn't find a list of what cards are white-listed by Lenovo in the BIOS, so I would have to buy a card and just hope that the Lenovo BIOS accepted it. The other option that Lenovo has for wifi when ordering an X100e is an Intel Centrino Advanced–N + WiMAX 6250 combined wifi and WiMAX card, which is 4-5 times more expensive than other wifi cards with Linux drivers in the kernel. Not an option for me.)

I am happy to say that the wifi card now works reasonably reliably (the machine crashes hard if I run powertop on it, and in the beginning I kept losing the connection, but that seems to have remedied itself), but, man, that was annoying. And in the future it will be annoying again. Not as much as the Poulsbo crap on the Acer which prevents me from upgrading the kernel and X.org, but still annoying.

People have discovered that another working option is a Lenovo-branded Intel Wifi Link 5100 card, by the way. See http://www.thinkwiki.org/wiki/Category:X100e

Interesting, thanks for the pointer, AK!

I wonder if only Lenovo branded Intel Wifi Link 5100 cards work, or if you can just get a "normal" Intel 5100 card. And I wonder where such cards can be purchased.

I got quite disheartened the last time I spent hours looking for alternative cards, so I'm not very inclined to spend even more time. Grrr, Lenovo.

I just hit this issue as the rtl8192se driver causes packet loss and dropouts in mine. I got a Dell Wifi Link 5100 off ebay and get the 1802 error. Going to investigate a modded bios.